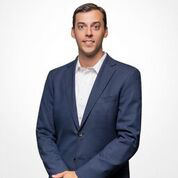 Michael relocated to Philadelphia from New York City where he previously practiced with both small corporate firms and a large international firm.

Michael earned his J.D. from New York Law School where he was a member of NYLS’s Center for Real Estate Studies, and he received his bachelor’s degree in Government from Franklin & Marshall College. In addition to practicing law, Michael enjoys playing golf and skiing and is a devoted follower of European soccer. Michael currently lives in Bryn Mawr, Pennsylvania with his wife Tyler, their son River and their dog Ranger..